By SiegfriedApril 7, 2019Simon's facts about

The cockpit instrumentation like the airspeed indicator and barometric altimeter are very important to keep flying safe. The cockpit crew can easily identify without calculations the actual airspeed and the altitude of the aircraft while on ground or in the air.
But how does it work?

An airspeed indicator (ASI) measures and indicates the forward speed of an aircraft. In an airliner or two pilot aircraft, each pilot has a similar ASI and each is fed from an independent pitot-static system. The pitot probe measures the combination of static and dynamic pressure, otherwise known as ram air or total pressure, and the static port measures the static pressure, or known as outside air pressure.
In a simple pointer/scale type airspeed indicator, pitot pressure is fed into a barometric capsule which is located in a sealed container rear of the instrument.
The important parameter is the dynamic pressure to indicate the airspeed better known as the indicated airspeed (IAS). It is the speed of the aircraft relative to the body of air through which it is flying. The indicated airspeed is of greatest interest to the pilot from an aerodynamic point of view. Critical speeds such as stalling speed or structural limit speeds are constant regardless of ambient conditions.
IAS depends on the density of the air, which varies with ambient temperature and pressure; thus, the IAS is only a measure of the speed over the ground with theoretically zero wind at sea level and in standard conditions of: 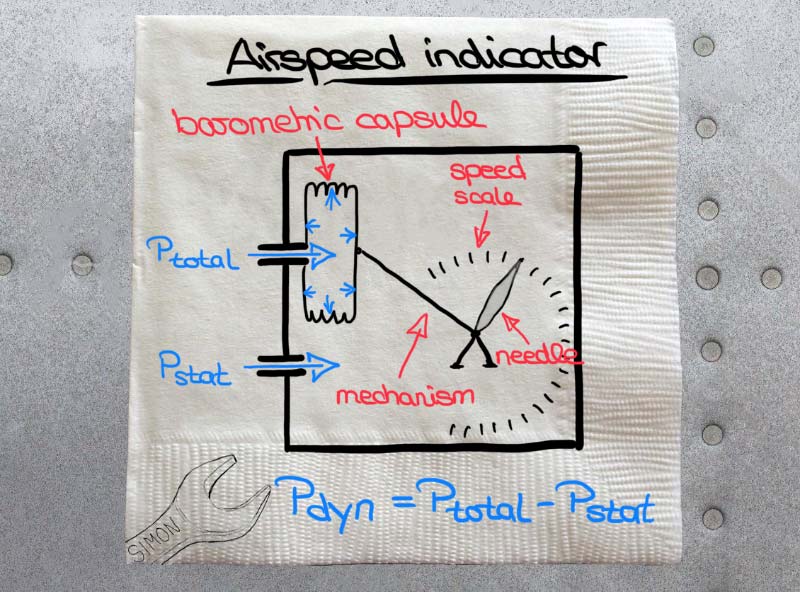 What happens inside the sealed container is, that the barometric capsule expands by the entered air pressure from the pitot probe and drives the linked mechanism which turns the needle on the scale.
Some of you will ask how does the ASI technically calculate the dynamic pressure only, if the system is fed by total pressure. I didn’t mention so far, connected to the sealed container is an additional static air pressure line. The line makes sure that the barometric capsule‘s surrounding air pressure equals to the outside air pressure.

Let’s see how it works. The formula for calculating the dynamic pressure is:
(P=pressure)
P dynamic = P total – P static

In a jetliner with a glass cockpit without any mechanical parts and mechanical indicators it’s quite different. An Air Data Module (ADM) converts the pressure input into digital output signals and provides them for the air data part of the so-called ADIRU (Air Data Inertial Reference Unit). The air data part calculates the speed, corrects them to remove the static errors and sends the speed data to the primary flight display (PFD) for indication of the calibrated airspeed (CAS).